Why Can’t I Retain Good Fundraisers?

If you work in the nonprofit field, you’ve heard that turnover rates are exceptionally high among fundraisers.  Depending on which survey you look at, the turnover rate is generally held to be in the 18-to-24 month range, with some studies showing them as low as 14 months.  (Shameless plug: Our Fundraising Search placements typically stay in position 36-to-42 months, or three times longer.)

This is an endemic problem in the industry.  Unfortunately, there is a paradigm out there though that needs to be broken: that this turnover is somehow the fault of the fundraisers.  It is not.  I cannot say this emphatically enough: retention of talent is the sole responsibility of management.

I cannot tell you the number of nonprofit leaders with whom I have found myself having a conversation who say, “I am looking for a fundraiser who I can trust is going to stay.”  Moreover, when I counter by asking what they are doing to make the fundraiser want to stay, they react with shock, confusion and, sometimes, outright hostility.

I have been a member of the management faculty at Georgia State University for almost seventeen years.  The focus of my teaching is organizational behavior and how it should influence managers in the workplace.  There are a large number of studies that show that organizations (both for-profit and nonprofit) who care about the quality of their leadership have better financial performance, higher valuations, more stable operations and lower talent turnover than those organizations that do not.

I have often said that fundraising is the world’s most specialized form of sales and marketing.  Rather than sell a good or service, fundraisers sell a relationship.  The skill sets, best practices, and strategies closely mirror those of corporate B2B sales, so it should not be surprising to learn that those jobs also have a particularly high level of attrition.  Prior to the pandemic, a LinkedIn study reported that annual attrition in that field overall was approaching 34%.  We can learn a lot from our for-profit colleagues about attrition.

Why do fundraisers leave jobs?

That’s important to understand, because many leaders believe that the best way to solve a problem with retention is to throw money at it.  When you do that, you are using the most expensive tool which is the least likely to solve the problem.  Let’s assume that your fundraisers believe in and are passionate about the mission.  If that’s the case, you have the greatest chance of keeping them satisfied and retained.  Why then, would they leave?  My research and discussions with candidates lead me to five key drivers of turnover.

Fundraising goals that are impossible to attain

Bad budgeting practices run rampant in nonprofits, and fundraising is frequently the victim as a result.  Nonprofits consistently make three mistakes in how they budget.

Regardless of what causes the unrealistic goals, research conducted by E.A.Locke and G.P. Latham into motivation demonstrated that, while employees will be motivated by difficult-but-achievable goals, impossible goals completely demotivate the employee.  If the employee does not believe they can succeed, especially if the goal was set without their input, they will lose all motivation to achieve it, and most likely devote their energies to finding better opportunities (and management) elsewhere.

In 2007, Patrick Lencioni published his book Three Signs of a Miserable Job.  (With Labor Day upon us, it’s a read I recommend to both managers who care about how they manage, and to employees who suspect they are in a miserable job.)  Lencioni argues that the three signs of a miserable job are:

For me, the book was life changing both as an employee and as a manager.  Personally, I came to understand the value of my time, and that it was too valuable to waste helping bad managers succeed.  Professionally, it helped me understand that I have to take an interest in the work of my people for the sake of their performance, even if it did not interest me intellectually.

Many of the candidates I have spoken with have told me that they work for nonprofit leaders who have little interest in fundraising or revenue production, and even less desire to participate in it.  An air of indifference towards an employee, especially a talented one, is going to give them little reason to remain in a job, even if they are personally connected to the mission.

Beyond anonymity, irrelevance and immeasurement, toxic environments are far more common in nonprofits than they should be.  I have worked with more than a couple organizations where the CEO has turned over the entire C-suite of the nonprofit every two years, and the board remains indifferent to that fact.  Even worse, I have seen boards and donors treat the staff – fundraisers in particular – like they were hired help.  I personally will never forget one organization I worked with as the second in command, with tens of millions of dollars in revenue under my responsibility.  At an event, a member of the board who wanted to leave as soon it was over, flipped his keys to me and told me – not asked – to have the valet bring his car around.  He didn’t even give me money to tip the valet.

Now, this story is not about my bruised ego.  (Those of you who know me know exactly how robust my ego is.)  The experience, I came to learn, was indicative of the underlying culture of that board.  Every officer at that company reported that they had similar experiences with board members.  Some were worse, involving unwelcome touching, irrational expectations for their donations, and racist or misogynistic comments made in public forums.  In fact, I wound up quitting that job, in part, because I was convinced that the CEO and board were going to cause a lawsuit that I did not want to be party to.

There is a lot of truth to the old saying, “No one, on their death bed, wishes they had spent more time at work.”  Fundraising is frequently not a nine-to-five job.  Events, donor schedules, and grant deadlines require fundraisers to have schedule flexibility.  And, any good professional is going to understand the need for that flexibility.

However, flexibility has limits.  Our colleague, Ailena Parramore, who may be one of my favorite colleagues ever, often says, “There is no such thing as a fundraising emergency that requires you to talk to me at 10:00 PM.”

Good fundraising is based on planning and execution.  People get into fundraising because they care about the mission and they stay in fundraising because they are good at it.  It does not (hopefully) become the most important thing in their lives.  If an organization does not respect work-life balance for their most critical employees, there is no reason for those employees to remain.  There are simply too many opportunities to earn the same (or more) money elsewhere.

Lack of opportunities for growth and advancement

Like compensation, lack of promotional opportunities is not as highly correlated to job satisfaction as other factors, but there is still a correlation.  A friend at a large nonprofit headquartered here in Atlanta discussed this with me recently after he was passed over for promotion.  Despite the fact that this organization does not have a great human resources reputation, he says he is fairly compensated, has a decent work-life balance, and gets along with the fundraising leader who is notoriously an HR nightmare.

When my friend asked why he was passed over for a promotion, he was told, essentially, “You’re too good and too valuable in your present role for us to promote you.”  My friend, being at the age where he should be rising in his career, has children’s college educations to plan for, and a desire to continue to challenge himself sought me out to ask if there was something wrong that he wasn’t satisfied with being pigeon-holed.

Wow.  So what can nonprofits do about this?

To start with, it is time for nonprofits to stop believing that good management is something they cannot afford.  Bad management costs significantly more than good management.  As early as 1995, Mark Huselid at Rutgers found that organizations that had good management and organizational behavior practices have a 19% higher survival rate than those that do not.  Further, they tend to have lower turnover (7% lower on average in the study), higher valuations, higher revenue generation per employee, and higher overall financial net performance.

Second, stop blaming the fundraisers.  Retention is the responsibility of leadership.  Leaders should always be checking on the satisfaction of all employees but especially of their key players.  In the case of fundraisers, every performance review should include a discussion of what the organization could do to help ensure the best performers stay.

Third, when someone leaves, find out why.  When clients hire us to do a search, we always ask (1) why did the last candidate leave; and (2) where did they go?  It is surprising – I personally might say alarming – how many leaders who do not know the answer to that question.

While I wrote this article for fundraising leaders, I suspect a good number of fundraisers are reading this.  Please always remember, it is not your fault if management has not given you reasons to stay. 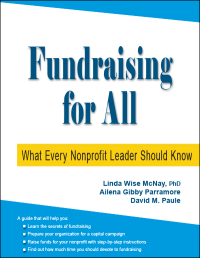 Dave Paule is coauthor of the forthcoming book “Fundraising for All: What Every Nonprofit Leader Needs to Know” with Linda Wise McNay, Ph.D. and Ailena Parramore.  To sign up to get the first release, click HERE.