What Should I Pay My Head of Marketing?  – Part 2

Let’s continue our discussion of how nonprofit marketers should be compensated. I’d like to begin by reiterating something we have said in many other Our Fundraising Search blogs. Working for a nonprofit does not include a vow of poverty. Nonprofit employees can be paid lower on the pay scales for their careers, but not below them. Whatever the position – program director, marketer, controller, etc. – a nonprofit organization still has to pay salaries that are reasonable within that job’s competitive set. Nonprofit boards who believe nonprofit status enables them to pay subsistence wages are deluding themselves, and ultimately setting the organization on a course for failure.

Compa-Ratios & How We Compensate Cross-Over Positions

A “cross-over” position is a type of role that exists in both for-profit and nonprofit organizations. Fundraising, although similar to sales, is unique to nonprofits, so therefore requires an evaluation of its compensation that is unique to that sector. On the other hand, professions like Marketing, Finance, Accounting all cross-over from for-profit to nonprofit. Therefore, it is easier to determine their salary ranges.

An organization should not expect to set a salary range for a cross-over position without consideration of what the compensation ranges are for that similar position in for-profit firms. Any profession is entitled to be paid fairly. So, salary aggregators like salary.com, glassdoor.com, and ADP are useful to determine compensation ranges. Before we get to marketer salaries, we want to understand something called a compa-ratio.

A compa-ratio is one of the most common metrics for pay. It compares an individual employee’s salary to the midpoint of a given salary range. This easy-to-calculate statistic needs to guide your compensation decisions.

Most for-profit organizations set target compa-ratios as part of their compensation strategy. Nonprofits should do this as well. It is common for a for-profit company to say something like, “our target is to have average compensation for all employees exist in a range of 75% and 105% of the compa-ratio for their profession.” That would mean that the organization’s marketers are paid 75% to 105% of the average for marketers everywhere.

Smart nonprofits do the same. Nonprofits can pay lower compa-ratios, but they are not going to be able to successfully pay below the minimum of that range.

Using the same methodology that we used for fundraiser salaries, we consulted our friends at salary.com, payscale.com and glassdoor.com. The world of marketing is so much broader than fundraising that we have to be judicious in selecting the right titles for comparison. For example, Chief International Market Officer might be an appropriate comparison for, say, UNICEF or Red Cross, but it’s probably a bit much for a local, community, theatre troupe.

In 2018, payscale.com conducted a study to determine how much of a pay cut workers should expect when moving from for-profit to nonprofit work. Their analysis indicated that the “nonprofit discount” is dependent upon job title, and can be significant. They also determined that nonprofit marketers were disproportionately underpaid.

“For seven of the eight titles we examined, nonprofit workers earned between 4 percent and 8 percent less than their counterparts at for-profit companies. Marketing managers were the outlier: those at nonprofits earn nearly 18 percent less.”

There is clearly a compensation problem for nonprofit marketers.

In our blog on fundraiser salaries, we focused on nonprofits in the $5 million to $15 million range. We are going to use the same level of revenue responsibility here. Once an organization gets above $15 million, their scope and needs are going to put them into competition with for-profits for talent, and so the market is going to determine what they have to pay. Comparable jobs in revenue scope in the for-profit world are typically going to be titled Director of Marketing. Per glassdoor.com, the national average salary for a Director of Marketing and Revenue is $115,941 in United States. Meanwhile, salary.com finds nationwide that the median is $150,151, with the following distribution. 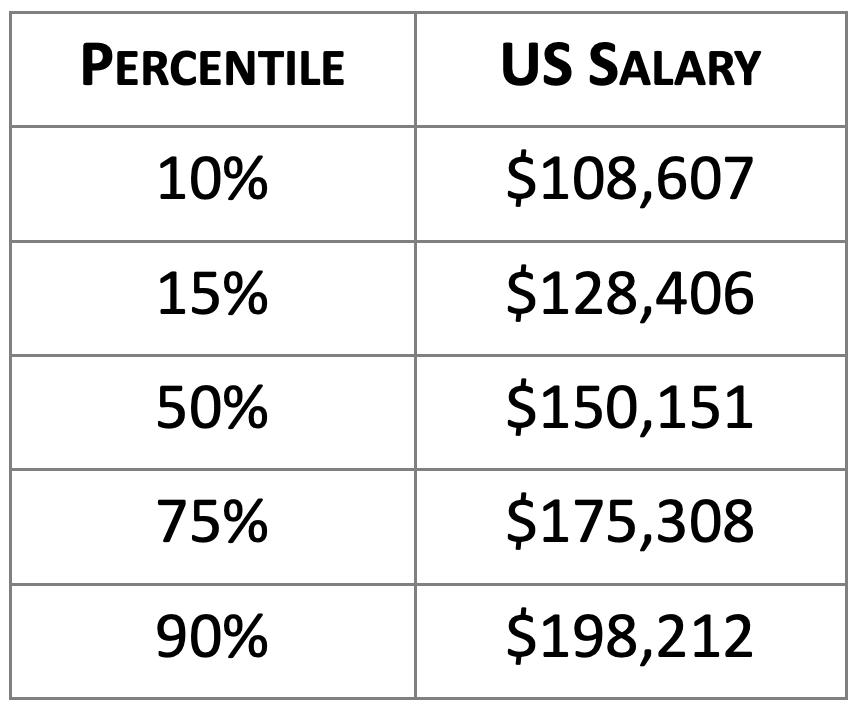 For cross-over positions, pick the compa-ratio strategy you can afford and pay all those positions according to that salary range. If you decide that your organization can only afford to pay 10% of compa-ratio, that’s fine, but realize that you are going to experience increased turnover of headcount in exchange for the salary savings. For clients in the range of $5 Million to $20 Million, we believe a compa-ratio target of 35% to 45% is a reasonable, justifiable and appropriate compensation strategy.